Next
Previous
Reviews of the Artist
by Miral Fahmy, Caravan, 19 May 1991, p. 7
Previous
Next

"He Finds Beauty in What Others Overlook" 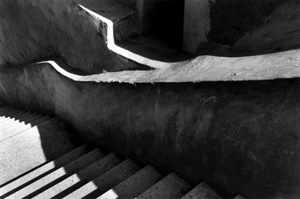 13/07/2008
The first thing that strikes you when you enter the newly established Sony Still Photography Gallery, hosting its first exhibition by photographer Michael McClellan, is the peace and quiet. The photo exhibition seems independent of the outside bustle, holding within it a wealth of serenity that hushes even the most over-enthusiastic "oohing" admirer.

Despite the fact that McClellan is my photography professor and probably my worst critic, this is the greatest chance I will ever have to judge the judge. It isn't every day you get to admire understatement. Rather than screaming at you the obvious themes of the cycles of life, death, religion and nature, the exhibition involves the viewer in an awesome, reverential challenge: "Look at me and behold man's attempts to reach the goal of fitting his life into natural spiritual dimension."

The pictures range from Pharaonic temple reliefs to banana plantations, natural scenes, and religious rituals from Jerusalem, Egypt, Southern Africa, and the United States. A collection of 28 years of work, McClellan's work's underlying photographic philosophy is clear: he finds scenes of beauty that viewers tend to overlook as part of the familiar "chaos" surrounding them. Beauty in the "chaos" can be seen in "Waves and Rock" taken in Alexandria and in "Red Sea Clouds." Even the pictures of moulids and monasteries have a different and unfamiliar aura, maybe because of their unusual depiction.

Several pictures resemble paintings in their careful composition and others tell silent stories that every viewer can weave to will. The broken church window that gives us an outlook onto a hazy graveyard has stirrings of a Gothic novel.

Enlightenment, joy and the true beauty of some nature pictures would put poetic imagery to shame. Shady fern fronds, ethereal lighted waterfalls, capricious clouds, and gargantuan rock formations show the beautiful and forbidding environment.
Yet other frames elicited a "so what." "Banana Plantation" and the temple reliefs are too general to have a meaning among the thought-provoking pictures. Other building and landscape shots did not leave much of an impression and should have not been in an exhibition entitled, "Harmonies: Studies in Nature and the Spirit."

To give credit where credit is due, McClellan does a wonderful job with light and shadows. One of my favorites is the shady stairs leading downwards to some mysterious unknown. The light gray halo surrounding the portrait of the monk did have some special development but to the effect of giving the man a saintly halo. By using natural lighting, some pictures, like the monk in "Easter Liturgy, Jordanville, New York," have a holographic appearance; the part that is shown speaks for the whole.

McClellan is the Director of the American Cultural Center when he is not traipsing about the globe taking photographs. All of the prints were developed by him and made with Leica and Hasselblad cameras. The prints are available for LE (Egyptian Pounds) 350. A modest price, I think, for a little peace of mind.
I'd give the kid an "A."